Crowne Plaza Fallsview / Blog / Are We There Yet? Drive Times to Niagara Falls 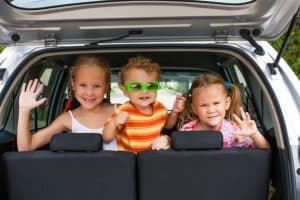 One of the best reasons to choose Niagara Falls for your vacation is its close proximity to many major cities in the northeastern portion of the United States. This means that it’s often cheaper to drive rather than fly, and who doesn’t love a road trip?

As airfare prices continue to rise and those pesky fees for everything just won’t go away, driving to Niagara Falls is often the best choice, especially for families and groups. Why fly when you can drive for a fraction of the cost?

We’ve put together a small list of drive times from some major cities near Niagara Falls, as well as a few interesting stops along the way.

Google maps shows the drive time from New York City to Niagara Falls as six hours and nine minutes without traffic, via toll roads, and covers 409 miles. The easiest route takes you through eastern Pennsylvania and western New York on your way to Buffalo, and Niagara just beyond.

Depending on your route you could stop in Cooperstown, home of the Baseball Hall of Fame, or any number of state and local parks along the way. Play around with Google maps to find the best route for your trip.

The drive time from Boston, Massachusetts comes in at 7 hours without traffic and the route covers 468 miles. The suggested route passes through Springfield, Massachusetts, home to Six Flags New England, and Syracuse, New York, where you can visit the Erie Canal Museum.

This drive is especially beautiful in the fall, and again, there are numerous parks and trails along the way where you can stretch your legs and take in the beauty of fall in New England. 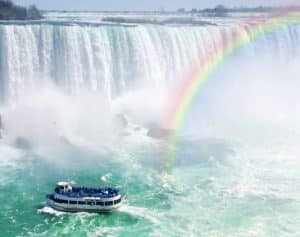 One of the nearest major cities to Niagara is Cleveland, Ohio. This drive takes just over three hours without traffic and covers just over 200 miles. Via Interstate 90 East, this route cruises along the shores of Lake Erie which finally tumbles over Niagara Falls and into Lake Ontario.

Take your time along this route, as you have plenty of it. The parks along the lakeshore are perfect for picnics and hiking, and you could even try your hand at birdwatching or fishing with the proper license.

About the same distance from Boston, the drive from Washington D.C. to Niagara takes just over seven hours and covers 400 miles. This might be one of the more scenic drives as Interstate 80 passes right near the Allegheny National Forest, one of the jewels in the United States Forest System’s crown.

Unless you’re on a deadline, it might be best to overnight near the National Forest so you have ample time to enjoy it before you complete your trip to Niagara Falls.

Some say that getting there is half the fun, and this is especially true of a road trip to Niagara. So pack your car, set your playlist, and head off to the adventures that you’ll find on the way to your final destination.