Unless you’re someone for whom vacations are set in stone thanks to work or school schedules, it can be difficult to decide just when the time is right to head out on a trip. Should you go during the height of the tourist season when the hustle and bustle is at its most interesting but most annoying? Should you select dates that coincide with holidays, or should you base your vacations around reducing your stress level, leaving just after your biggest work projects are completed?

There is no single answer to these questions and those like them, and when you’re headed to a destination like Niagara Falls, it’s easy to see why. Regardless of the season, Niagara is one of the most entertaining and beautiful destinations in the world. Summer, winter, holidays, Wednesdays? They’re all great times to visit.

That being said, now and again something occurs within the region that’s so special it’s able to tip the scales toward a legitimate answer to the question, “When should I take my Niagara Falls vacation?”

On April 21st and 22nd, one of the world’s best-loved comedians, Jay Leno, is slated to take the stage at the Fallsview Casino, which makes that week in April the perfect time to visit. Whether you’re a lifelong fan or you just want to head out for an evening of entertainment you won’t forget, here are three reasons to see Jay Leno when he performs live in Niagara Falls.

1. He Got His Start in Stand-Up

Most people know Jay Leno from all those years he spent as the host of The Tonight Show, but he actually cut his teeth as a comic by performing stand-up around the country. After moving to Los Angeles after college to do some writing for a sitcom, Leno decided his best chance at making it in the funny business was through stand-up. He booked and performed as many as 300 shows a year from the 1970s until he took over The Tonight Show in 1992. So, if you want to see a master at his craft, you’ll want to see Leno live and on stage. 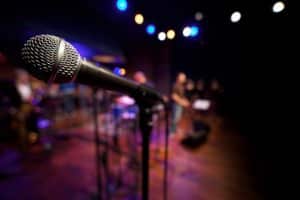 The Fallsview Casino boasts one of the finest and most intimate performance venues in all of North America. The Avalon Theatre Ballroom has seating for just 1,500, which means you’ll be able to see every eyebrow lift, shoulder shrug, and grimace Leno makes.

Completely devoid of a nosebleed section, every seat in the Avalon Theatre is comfortable, and no matter where you sit, you’ll feel close to the stage.

Another reason to see Jay Leno live is that he’s actually a pretty interesting person. An avid motorcycle and classic car fan, he writes a regular column about vehicles titled, “Jay Leno’s Garage.” He’s been married to his wife, Mavis, since 1980, and he’s impressively self-deprecating — especially about his chin.

If you’re on the fence about when to visit Niagara Falls, and you love to laugh, book your stay so that it overlaps with one of America’s funniest men. Tickets to see Jay Leno start at just $80.

← When You Need a Book in Niagara Falls…

3 Tribute Shows to Catch in April →