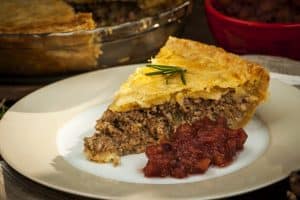 If you’re headed to Niagara during the holiday season, you’ll notice that many of our restaurants offer fare in keeping with the season. While some of what you find is quite similar to the traditional holiday foods found throughout North America and much of the Westernized world, if you look a little closer, here and there, you’ll spy a pastry, dish, or dessert that’s a bit unusual. Here is a brief look at some aspects of what it means to cook and eat like Canadian around the holidays.

A much-beloved spiced meat pie, this French-Canadian treat was originally made with passenger pigeon meat, but since they were hunted to extinction, the pie is now made with finely diced meat that may include veal, pork, or beef, although many traditionalists also like to include some form of wild game to give it some of its original flavor. For those living along the coast, it may also include salmon or another type of fish. The spices can vary but often include savory, cloves, nutmeg, dried mustard, and the like. Tourtiere is traditionally served on Christmas Eve and is a must for any reveillon — the French term for a long dinner that precedes holidays like Christmas and New Year’s Day. These long dinners usher in the holy day with a meal that’s so lengthy it often lasts until midnight.

Another classic Canadian holiday treat of the French-Canadian variety, a Buche de Noel is a yule log cake that, for many throughout Niagara, symbolizes the holiday season like no other. Shaped and decorated to resemble a log, this Christmas cake is usually a yellow sponge cake topped with chocolate buttercream, but any variety of cake will do, since it’s the shape and look of the dessert that matters most. The icing is made to look like bark, and it is often dusted with powdered sugar to imply a snowy cover. Other decorations can include real tree branches, fresh and seasonal berries, and mushrooms that have been crafted out of meringue. 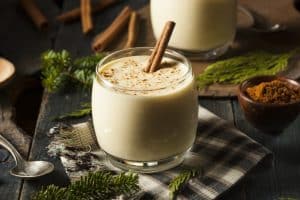 While eggnog is a popular drink throughout North America and around the world, Canadians like it best when it’s the real thing. In other words, homemade eggnog in Canada is made with raw eggs and real cream. While there is some danger in consuming raw eggs, if the eggs have been treated correctly, the nog kept at a safe temperature, and the mixture tempered with rum, brandy, or whiskey, the only danger you’re likely to find is in not having enough to go around.

Like almost every other Christmas holiday table, the centerpiece is a large roasted bird of some kind that has been browned to perfection, filled with a stuffing that often includes beef or sausage, and topped with creamy gravy made from the bird’s drippings. While turkey is probably the most common choice at family gatherings throughout the country, roasted goose is still a perennial favorite.

Whether you get the chance to eat a delicious holiday meal in one of Niagara’s many fantastic restaurants, or you hope to recreate some of the region’s menu for yourself back home, holiday cooking in Canada is something every Canadian looks forward to with relish.

← 3 Ways to Get Your Music Fix in Niagara This December

3 Places in Niagara to Relax and Devour a Book →