Crowne Plaza Niagara Falls-Fallsview is excited to announce that we will have your tickets to see three of Canada’s most acclaimed artists when they perform in December as part of the new Niagara Falls Music Live event! 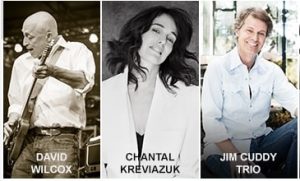 We have created a Music Live Package with tickets to see The Jim Cuddy Trio, Chantal Kreviazuk, and David Wilcox as they take to the stage over the course of 3 shows as part of the new city-wide music celebration. From December 27, 2021 through January 1, 2022, Niagara Falls will be transformed into a destination for live music. The event features a mix of ticketed and non-ticketed concerts and an exciting array of music genres. The week-long initiative will see more than 75 shows hosted at 20 venues throughout Niagara Falls. The exciting lineup features headlining artists in large scale ticketed shows, and small intimate performances from some of the best provincial and local artists.

General Admission Tickets for these concerts are available in a Music Live Hotel Package which include:

Hotel Packages including VIP Tickets with guaranteed seating in the first 10 rows are available for $40.00 more per ticket.  Individual concert tickets are also available for each of the shows.

In addition to large scale shows, Niagara Falls Music Live features a ticketed New Year’s Eve Concert at Scotiabank Convention Centre-which is directly across from the hotel-with Canadian country rock icons Blue Rodeo, singer/songwriter Serena Ryder and JUNO Awards 2021 Breakthrough Group of the Year, Crown Lands. The Hotels listed above have a Hotel Package with New Year’s Eve Concert Tickets – which saves 50% versus ticket only purchases. These shows add to the lineup which already includes Canadian rockers The Trews who will play December 28 at the Convention Centre.

Don’t miss your chance to see these artists in Niagara Falls, Reserve Your Hotel Package for the ultimate music getaway!