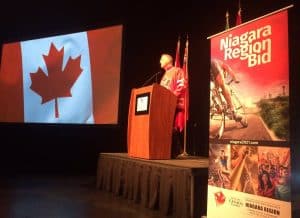 The Canada Summer Games are officially coming to Niagara in 2021, which is going to make for an exciting time throughout the entire region. The Canada Games are a national amateur sporting competition that began in Quebec City in 1967, and are held every two years, alternating between the Summer and Winter Games.

The 2021 Canada Summer Games in Niagara will feature sports like tennis, basketball, soccer, swimming, track and field, diving, rowing, volleyball, golf, and more, with participating athletes representing their province or territory. Many athletes who compete in the Canada Games go on to represent Canada in the Olympic Games, and since the inaugural competition in 1967, more than 75,000 athletes have taken part.

The spotlight will be on Niagara in 2021 and there will be no better time to visit the region as its natural beauty in summer will be on full display along with amazing athletic events, special Games ceremonies, and more. Keep up to date with all of the latest Canada Games updates by following @CanadaGames and @Niagara2021 on Twitter, and get ready to experience some incredible Canadian athletics in one of the country’s most remarkable destinations.

← Hiking and Walking Trails in Niagara

Wine and Dine in Niagara Falls This Spring →