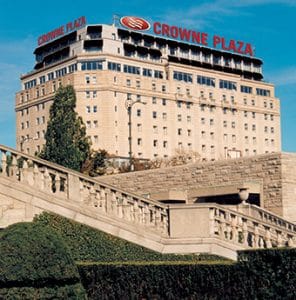 It’s been 87 years since the Crowne Plaza Niagara Falls-Fallsview opened its doors to the public, welcoming guests from all over the world to stay in the hotel then known as the General Brock Hotel. Named after the general who valiantly defended Upper Canada during the War of 1812, the General Brock Hotel became an historical institution steeped in a rich history that is still worth revisiting and celebrating today.

The Crowne Plaza was considered to be Niagara’s first luxury hotel at the time of its opening and has hosted a number of notable guests over the years since then. Among them are Queen Elizabeth, Princess Margaret, Shirley Temple, Walt Disney, and perhaps most famously, Marilyn Monroe, who stayed at the hotel during the filming of the 1953 film “Niagara”.

Today, the Crowne Plaza continues to uphold its legacy of elegance and charm by offering remarkable accommodation and dining experiences to every guest who comes to stay. Celebrated Chef Massimo Capra has brought his culinary prowess to the hotel’s incredible Rainbow Room by Massimo Capra restaurant and has crafted a menu that showcases the rich bounty of Niagara in innovative and modern Italian dishes.

The Crowne Plaza is a celebrated institution that offers guests incredible 4-star Fallsview accommodation just steps from the thundering waterfalls. So when visiting Niagara Falls, be sure to immerse yourself in the hotel’s rich history and book a stay at the Crowne Plaza Niagara Falls-Fallsview to experience all of the luxury and charm for yourself.

Where to Experience World-Famous Icewine While Visiting Niagara Falls →