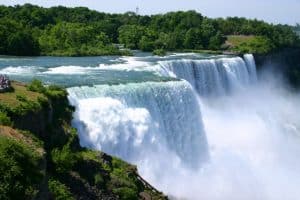 We all know the world is a pretty amazing place with some spectacular sites, ancient and modern, manmade and natural. Our planet is a glorious place and everyone has their favorite world wonder but as we move toward a more modern era things are changing just a bit.

We all learned about the ancient wonders of the world, which included the Lighthouse at Alexandria, Egypt and the Colossus of Rhodes. The only one on that list still visible today are the Pyramids at Giza and all of these were manmade.

Then we have the seven natural wonders of the world. These include the Grand Canyon in the United States and the Great Barrier Reef in Australia. However, people have broken these lists down further to include the wonders of specific countries, and Niagara Falls certainly tops Canada’s version of that list.

But what if we added an 8th natural wonder of the world? How would that work and what stunning, natural site would win? Well, the internet took on this challenge and the winner by popular vote is (you guessed it) Niagara Falls!

So what brought Facebook users out in droves to vote for Niagara Falls as the 8th natural wonder of the world? Let’s find out and give you even more reasons to visit Niagara Falls.

The area around Niagara Falls called the Niagara Escarpment is one of the most unique geologic features on the planet. Formed thousands of years ago by advancing and retreating ice sheets, the Great Lakes were created by the melting ice and the mighty Niagara Falls were an additional result.

Of course, the science behind it is much more complex but to put it simply, the Great Lakes were formed and the Niagara River connected Lake Ontario with Lake Erie. Land shifted and created the series of waterfalls we know today. As far as geology goes Niagara is the clear winner when it comes to natural wonders.

While not exactly related to the natural aspects of Niagara, one can’t deny the fact that Niagara is just simply a fun place to visit. Taking a boat ride under the falls, dancing the night away at the casino, or making memories with you family, it’s hard to deny the appeal of a visit to Niagara Falls.

Scenic hikes around the area, a day at the indoor waterpark, the superb dining, outstanding local wineries and so much more make Niagara one of the best places for a couple’s getaway, family vacation, or any reason at all. 30 million people per year visit Niagara Falls and with numbers like that you know there’s something special happening here.

They say it’s not official until it’s Facebook official so I guess this is it! Niagara Falls is the 8th wonder of the natural world and there’s no better time to book your vacation to Niagara than now!

← 5 Fall Concerts in Niagara You Won’t Want to Miss